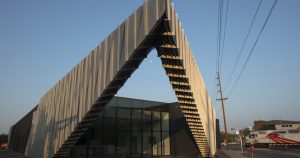 In the center of Santa Fe architects are obliged to work in stucco or face the wrath of the city’s Historic Design Review Board. Not so in the Railyard, a booming district about a mile downhill from the heart of the New Mexico capital, where SITE Santa Fe has been showing contemporary art in a former beer warehouse since 1995.

Now the Manhattan-based SHoP Architects has turned that warehouse into a building that SITE Santa Fe director Irene Hofmann calls “a game-changer” for her institution. The building, which SHoP enlarged by about one-third to 36,000 square feet, is designed to facilitate the making and showing of contemporary art, while giving Santa Fe a bold new landmark.

Its most prominent feature is a “prow” of perforated metal panels angled toward a busy intersection. The prow frames the building’s new glass front, which replaced an opaque stucco wall. “It used to be you could stand outside and not know what was happening inside,” says Hofmann of the once-windowless building. Now form advertises function.

For Christopher Sharples, the SHoP principal who led the project, part of the inspiration was SITE’s site. The building parallels a park designed by architect Frederic Schwartz and landscape architect Ken Smith that opened in 2008. Like the surrounding district of former warehouse buildings, the park—with detailing much like that of New York’s High Line—“has a grittiness and attitude,” says Sharples, “and we didn’t shy away from reflecting that in the new building.” He adds, “The park and the building are symbiotic.”

The striking prow was manufactured in Shanghai following instructions conveyed digitally by SHoP.  But for the most part, Sharples wasn’t going for pyrotechnics. “The focus,” he says, “was on getting the galleries right.” As Hofmann explains, “Our aging building was making it harder and harder for us to show art.”  For one thing, the galleries lacked proper climate control, making it impossible for SITE to accept loans from most other museums; now its systems are up to date. And cramped quarters meant that the museum often had to close to allow new shows to be installed; now SITE, with movable walls and generous back-of-house facilities, will be open nearly every day of the year, says Hofmann.