A Traditional Adobe Compound in Santa Fe Is Reimagined

An unexpected spin on the traditional-style home, opens-up a downtown adobe in Santa Fe 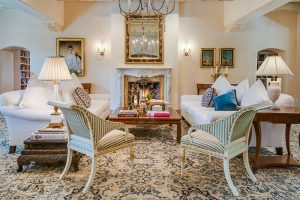 The pivotal question facing New Yorkers Richard B. Stolley and Lise Hilboldt was whether a passion for damask and Regency rock-crystal chandeliers could thrive in the land of Navajo blankets and chile ristras.

It was not an act of rebellion exactly but rather one of “creative exuberance” that led the couple—he the senior editorial adviser of Time Inc. and founding editor of People, she an actress and writer—to reimagine a traditional walled adobe compound in Santa Fe, where the kiva-fireplace school of decorating is something of a religion.

They were drawn from the Upper West Side to Santa Fe for many reasons—chief among them the luminous atmosphere and the world-renowned Santa Fe Opera. “I think many people come to Santa Fe to get away from the stylistic constraints of life elsewhere, but that can prove to be a trap,” the non-rustically inclined Hilboldt observes of her adopted home. “I think you have to create a style in which you feel free, modifying it based on local beauty.”

Quietly tucked behind two sets of adobe walls on a historic street a short walk from the Plaza and a major nature preserve, the compound had a relatively intact guesthouse and a main residence that had undergone numerous reconstructions. “There were many long, awkward hallways and small, dark rooms that left the house feeling jerry-built, without access to views,” explains Hilboldt. The good news: thick pink plaster walls, aged vigas, stands of quaking aspens—and killer views of the Sangre de Cristo Mountains. She found herself becoming emotionally absorbed in the compound’s essence. She regarded it as “a backdrop for life, as a series of vignettes for conversation.”

Click here to see the full article in Architectural Digest.