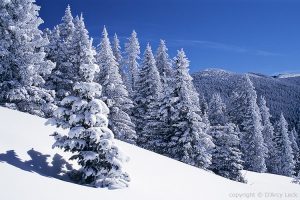 Snowfall looks different in New Mexico. When it snows, the ground looks redder, the junipers greener, and, somehow, the snow whiter. Snowfall stacking on adobe looks like some kind of magical realism. It makes for an altogether incredible aesthetic.

But those beautiful days were behind us, I assumed—it was late March after all. A few days earlier, I skied in denim. I had friends in town, visiting from California, and they didn’t even bring jackets. Plus, this whole mountain biking thing—that was pretty fun.

Then, in the matter of a March afternoon, the weather went from 75 and calm to gray and gale force. The plaza was eerie. By the time we left dinner at Tune Up, unarguably the best restaurant in town, it was dumping. Storms do that here, I learned. They show up unannounced and disappear just as quickly.

Ski Santa Fe reported 11 inches in the morning, but I still didn’t quite believe it. My friends and I took our time eating huevos rancheros smothered in green and red chile sauce and sopaipillas at the Pantry diner before we headed up Artist Road for the 15-mile drive to the 10,350-foot base of the ski area. The snow continued, blowing at hard angles. The road was a disaster—Texans. We counted a dozen abandoned cars. It was a war of attrition. Once we squeezed through a three-car pileup and a snowplow, we were on our way toward freedom.

These Are the Next American Ski Towns

We parked near the front of the lot and were on the lift at 10 a.m. At the top, we couldn’t see a thing. We pushed for the trees, where we would ski steep, fresh powder through the glades with about 50 other people the entire day. It was the best skiing of the season, and by the time we were home later that afternoon, it was summer again. We went into the historic plaza for cocktails at Secreto and a Spanish dinner at La Boca. The sunset was New Mexican standard—the desert turned gold and the patchy skies a range of oranges, pinks, and purples.

Why You Should Live in Santa Fe