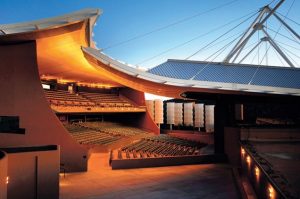 The 2018 season presents five operas in 36 performances, running from June 29 to August 25, 2018. The Opera’s 62nd season offers works by American icons and European masters, four of which are repertory from the 20th and 21st centuries.

Perhaps no other opera has been more important or nostalgic within the history of Santa Fe Opera as Puccini’s Madame Butterfly. It was the first opera presented in the 1957 inaugural season of the company, the first performance in the rebuilt theater in 1968 following the Opera’s devastating fire, and the opening of the 1998 season which introduced the newest theater after major renovations and expansion. It is fitting that Puccini’s masterpiece is presented in the season that celebrates the completion of recent renovations, the 50th anniversary of the Opera’s current stage, and the continuation of the Setting the Stage Campaign. In one of Santa Fe Opera’s most popular productions, hailed as “sensitive, freshly considered and affectingly sung” by The New York Times at its debut in 2010, Madame Butterfly opens on June 30. Two highly-regarded Cio-Cio-San interpreters share the title role – Kelly Kaduce, beginning on June 30 through July 20, and Ana María Martínez, beginning on July 30 through August 24.

John Adams and Peter Sellars’ Doctor Atomic explores the ushering in of the Atomic Age on July 16, 1945, when the first bomb was tested in the southern New Mexican desert near Alamogordo. The opera opens at the laboratory of the Manhattan Project in Los Alamos, some 25 miles from Santa Fe Opera’s stage. The Opera’s audience will finally encounter this masterpiece under the very same night sky that Robert Oppenheimer and his team of scientists experienced nearly 75 years ago. According to The San Francisco Chronicle review of the premiere in 2005, the opera “stands as a major addition to the operatic repertory of this new century, the first to be inaugurated with the specter of instant death very much around us.”

Another one of Santa Fe Opera’s most admired productions, Rossini’s The Italian Girl in Algiers, has been received in select cities throughout the country since its debut in 2002 with similar enthusiasm. With Robert Innes Hopkins’ huge pop-up book set with crashing planes and hot air balloons, David C. Woolard’s1920s costumes, and the title role of Isabella conceived as Amelia Earhart-esque, it’s no surprise that the production has been so popular.

Richard Strauss’ Ariadne auf Naxos, also presented in the Opera’s first season, returns in a new production directed by Tim Albery. One of the composer’s most innovative and forward-thinking creations, Ariadne combines theatrical slapstick comedy with high drama set to some of Strauss’ most beautiful music.

Click here to for more information on the Santa Fe Opera’s 2018 season.

Click here to see my luxury home listings on homesantafe.com.